There may be no Hollywood film about Lefty the pit bull, but given that she took a bullet for her “Dad” there probably should be. In the middle of the night, in Accomack County, Virginia, four intruders broke into her owners’ house and discharged a weapon. Luckily for her “Dad” Lefty jumped in front of the muzzle of the gun, taking a bullet to the shoulder for her trouble.

An incredible story of canine courage, but just the beginning of this particular tale. Whilst Lefty was able to protect her owner, the robbery took place nonetheless and she was left with a shattered shoulder and humorous bone as well as irreparable muscle damage. Veterinary surgeons decided the only course of action was to amputate the shattered leg.

However, having been robbed, the family were not in the strongest financial position and were unable to cover all the costs of their dog’s care. Staff from the surgery itself shared Lefty’s incredible story on social media in a bid to raise the necessary funds. In next to no time the story had been shared over 4,000 times and donations had come pouring in from generous members of the public. In less than a day nearly seventy-five percent of the money needed to cover the cost of the procedure had been raised.

Lefty’s amputation was performed and the very next day the veterinary surgery posted a video on social media. It was Lefty trotting around a yard “like she’s been a 3-legged dog her entire life!” By the time she was ready to be discharged, staff from the sugery took to social media once again to announce to followers that almost one hundred percent of the costs of the surgery had been covered by donations. 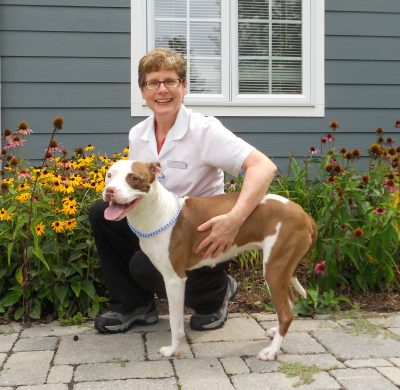 It’s a story of incredible bravery on the part of one dog and the overwhelming kindness of hundreds of (human) strangers. ❤